In March 2015, a new principal contacted me. Her new international Kindergarten was to follow the EYFS and so wished to know more about our software.  Numerous emails were exchanged between us about what we could offer.   Sue, originally from South Africa, had lived in Australia and had set up a centre there. I was a little surprised as we hadn’t had any international interest in the software up to that point.  She then sent me a request.  “Please, can you meet me in London?”

Sue was travelling through if I remember correctly.  She was doing a tour of places where her family had lived in England.  It was a big family reunion, I think it was around her mother’s birthday, and the family were arriving from a host of different countries.   I was about to embark on my own reunion with my sister who was over for a short time from Australia and the first opportunity was just impossible. Sue and I managed to find another time, however!

I sat in a café on Kings Cross station waiting for this lady to arrive.  She was travelling from Liverpool and intended to go straight to Heathrow after our meeting and back to Hong Kong.

Sure enough, I remembered her arrive, full of smiles.   Accompanied by her luggage, a large backpack, she flipped open her laptop and we had a coffee while talking about spark.  She showed me photos of the Kindergarten she had recently joined and outlined the plans for the future.  She asked, “You will look after me Catherine – I don’t know very much about the EYFS?”  That, in my book, went without saying and I reassured her.  It is just part of the spark culture; how can we help people “get it right” if we don’t help them achieve the most from the software!

Over three years later, I had managed to arrange a visit to Hong Kong, on my way back from China – with just one day set aside to visit.  The Kindergarten is now Ashville Kindergarten, part of Ashville School based in Harrogate north of Leeds in England.   Sue’s posting on Facebook had supplied me with regular updates on children’s activities and the surrounding area.  The super typhoon hit Hong Kong in September 2018 and this unfortunate event provided me with further insight.  There was concern that the building might be damaged and possibly flooded.  I felt for them, and luckily it was ok, although I was told they lost a tree outside the front door.

So I had arrived by train and taxi’s from Shenzhen in China.  Sue found me early in the morning walking to the school with my two large and heavy suitcases.  I had four computers and an exhibition stand, carted from the UK for an exhibition in Beijing and all was packed carefully to take home that evening.  The smaller bag went on the back of her bike and we went for a coffee en route.

Now, I was in the warmth of the Hong Kong climate and we reminisced.  “What do you remember about our meeting in London Sue?”

She laughed.  “Yes, I can remember meeting you in a very busy café.  I identified you immediately, I think you told me what colour scarf you were wearing and I can remember you showing me all the software and the recent changes that had been made.”

I acknowledged that we managed it in the space available.

“I had my suitcases all squished next to the table.  It was wonderful … at that stage I really loved the product, I really loved it and it was just wonderful to put a face to it and to know I had some support on it, which was the main thing I wanted.”

I said, “Well that’s my next question, (we giggled a bit) I remember you saying, I don’t know much about the EYFS, you will look after me, won’t you?”

“Mmmm,” she said as she smiled at me.  We laughed. “Yes, I remember saying that … because my whole experience was with Australian Early Years which is very similar but still not the same.  I was just so worried about going into a new… em … especially on the assessment side with a whole lot of teachers with no experience.  None of them had EYFS experience.”

“So you really needed to be seen as the expert at the time?”

“Yes, I really needed the software to guide them on the developmental milestones.  The other thing is if I hadn’t gone with spark I would have had to develop a whole paper system.  That is something I really don’t like.  I hate paperwork if it is unnecessary.  I’d rather do things electronically.”

I continued to eat the jam-packed doughnut she had bought me.  Where we sat, it was a quiet “cottage style” area in a bakery, with the occasional person popping in to buy a bun or cake.  It was so different from Kings Cross Station.

She went on, “I think we only had about half an hour before I had to fly.”

“Yes, yes,” she said, “that was really only a dream at that stage.  It was where we were heading.  We are now heading to expand in Hong Kong. The only difficulty on Lantau Island is to find a big enough location.” Sue went on to explain the new plans now the school had become part of Ashville College and Ashville’s strategy for future expansion in the area.

Suddenly, we realised we needed to be on the move to arrive in time to greet children and parents.

I felt it in my bones, I knew I was going to be impressed and I was.

It was a ‘shoeless’ environment, with bright and friendly spaces.  I could tell that the design had been influenced by an experienced early years person.  A small low sink in each room and shelving units that swung in and out, offering nooks to play in and low boards for mark making.  Ashville International Kindergarten and Nursery (Lantau Island) was situated right on a corner, the children’s rooms look out over the sea and beach.  As I had already seen on Facebook they make good use of the local area which complements the huge indoor space in the middle of the facility.  A ‘car park’ with each bay offering a trike/ride on experience along one side, large equipment, floor mats etc presented for physical boisterous play.  The area was also organised so all the children can meet up together.  All staff speak English with native speakers to support children in learning Mandarin and Cantonese.

What impressed me most was how staff respected the children.  In being introduced to a new child I was told, “he is attached to his shoes at the moment”.  Children could opt out of the class activity/activities.  Classes were small with two adults and teachers were tuned into the children’s needs.  They were also supported in following their own interests and choices were respected.

I noticed one small boy acted as a “frog” earlier in the day.  He was the youngest child in the afternoon and was taken aside to do some painting.  He asked for green paint.  He “scribbled” green across the paper with the paintbrush; “a pond,” he said.  He was given some white paint, which he mixed with some of what he had.  As he painted he told his story of the frogs (spots of light green paint) on the pond.  Using the original paint he covered them over so they vanished (simulating the frogs swimming out of sight) to redraw them again.  All executed with his narrative of what was happening.

It was all a delight. 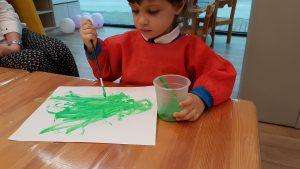